Strength and Style - the wren

Diana Taylor remains a woman to watch.  Though out of the limelight now that her term is up as official companion to the former New York Mayer Bloomberg, a run for political office is still a strong possibility.  I  lover her no nonsense approach to dressing, and that she looks like a woman of a certain l'age, meaning her face looks like a real woman's face.  So lovely.

She's really nailed that fine balance of looking totally put together without appearing to have fussed, and having something close to corporate uniform as these glimpses of style attest.


And then there's the hair. Have you been following the hair chronicles for power women?  The higher you climb the more perfect the hair must be.  It's exhausting.  The gender hair gap conversation reawakened by this ad for shampoo.  So here Diana scores again - look at her fussless do.  This is a woman who could actually go for a run at lunch and then grab a shower and look entirely presentable - as her male counterparts do.  We've really got to get beyond standards that just add another thing to the already too full plate.  Ok, enough you say. 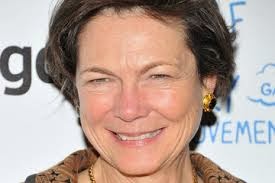 Hats off to you Diana!  What will you do next?
Posted by L'age moyen