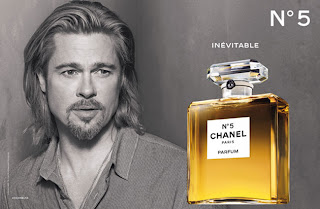 Notice I didn't write to grow old with Brad Pitt.

I don't get this campaign at all.  Makes no sense to me - where is Catherine Deneuve for god's sake?

I digress.  The campaign strategy is not what this post is about.

So, I'm walking into a large department store and there blocking the aisle is a huge poster of Brad looking every one of his 48 years.  Yes, bags under the old eyes, the ones that don't come from a late night but from years of late nights (and some of those with kids), lines around the eyes and across the forehead, the skin not tightly stretched against the cheekbones - the stuff that whacks me in the eye when I turn the bathroom light on at 6:30 am.

But where's the retouching?  Where's the finishing that makes Julianne Moore look 35 instead of 51?  I know she's a natural beauty (and doesn't believe in cosmetic surgery) but come on, there have got to be some signs of aging. 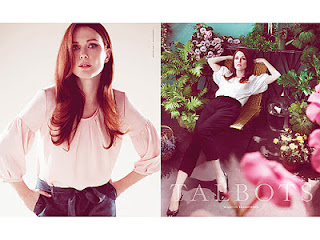 As delighted as I was to see that Brad had declined all offers to retouch, at the same time it just annoys me that women aren't afforded the same opportunity to be accepted for who they are in l'age.

I would prefer to see a few lines and sags - there is nothing more beautiful than a beauty who ages with grace.  Good for Brad.  Can anyone site an equivalent female star in a major campaign that is not retouched?  Do tell.

I'll get off the soapbox now.