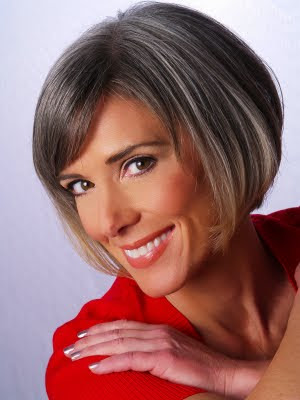 Doesn't she look fine? See how she got there. Shereen.

At least 6 years ago at the tender age of 44 (seems so young now) I started to get this chunk of grey coming in at my hairline. The rest remained pretty much dark, and my colour is a really dark brown (not a hint of red, more on that later). I rather liked it and found a young, totally punk hair stylist who liked it too. She played it up by colouring everying (except the grey streak in front) a really solid dark brown. I loved it - in addition to drama, the thing that colour does so well for fine hair is to give it texture and weight. I loved the grey on brown. Then I moved to a new city.

Finding a stylist who accepts grey is not easy. It just goes against their grain as professionals, and as people who want to eat and possibly save for retirement. I understand that, yet thought, since I'm so comfortable with it, surely this lovely stylist (firmly in l'age) will come around. And so we began our relationship. She worked around the grey. Always asked if I still liked it. I did. And as time wore on inevitably more grey came through and I found myself having to engage in root touch-up activity in what had previously been securely brown territory.

I began by going back to my stylist for the touch-ups but that was a pain in the butt. Then I started with the stuff you use at home. But the grey was coming in fast and furious. So I concluded, enough is enough, time to let the grey come in full force. As a transition phase, I thought ... grey highlights (I had Shereen's look in mind - not that I'd seen Shereen yet). This poor stylist worked for 2.5 hours trying to get grey to take in my hair. Not easy on coloured dark hair. It was a nightmare. She finally got the right combo (can you imagine the chemicals that were poured on my head?) and after all that effort it lasted for about a week ... then turned light brown. And looked like crap.

I put up with it for a couple of months (remember, lazy), then finally had enough and went back to my stylist. She agreed on the overall effect (bad). And said, let's just return to the dark solid and lighten it up at the front. I thought, "What the heck? Let's do it."

So when the colouring was done and she removed the towel, I took one look at my hair in the mirror and gasped. I mean a full-on intake of horror. It was shocking. A rare moment when I was actually rendered speechless. After I calmed down, it occurred to me that now was my opportunity to go full-on high maintenance. If not in l'age, then when? That's it, new leaf. Possibly the real me was fully emerging.

The first person I ran into (at the grocery store) was completely appalled and had a hard time rummaging up any enthusiasm for the new look. Not a promising start.

Anyway, I tried to carry off my new look with aplomb. It was difficult. I grew to hate it. Hated it when the greyish roots started to grow in. Realized what a nightmare I had on my hands to both touch up the dark roots at the top, sides and back, while dealing with the blond at the front. I wouldn't be able to use the home root touch-up stuff at the front because the home-colourist cannot go from grey to blonde with success. And remember, I am both vain and lazy, so I looked awful and it was a lot of work. 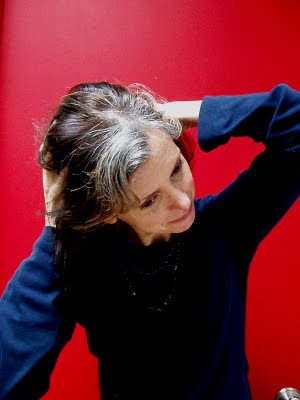 
And so my lazy fate was sealed. I would just harden my resolve ... and go grey.

Next up - Going Grey - the movement.
Posted by L'age moyen